The following is my first attempt at public opinion writing on a Middle East subject and I’d appreciate any comments, suggestions and criticisms to help me improve.

Also, for the voyeuristic, you can check out my thought process during the writing of this article by checking out the really cool time-slider function over at Piratepad which allows you to view every character and word I’ve typed in a chronological order. 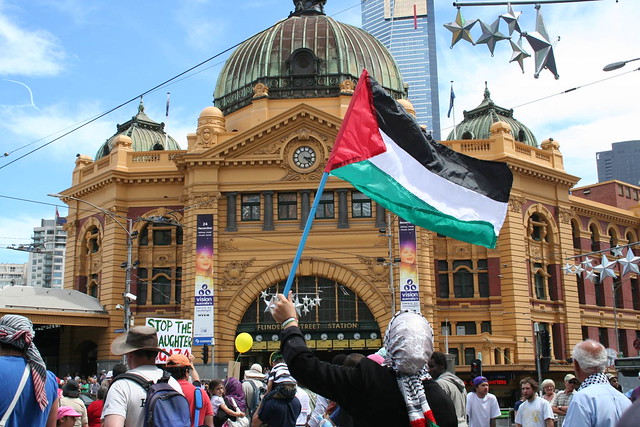 I refer to Ali Abunimah’s opinion piece titled, “Towards Palestine’s ‘Mubarak moment’” on Al-Jazeera English. The author in his article writes about why he feels that the Palestinians should follow the example of the recent Arab uprisings to call for the dissolution of the Palestinian Authority (PA).

The author argues that with the revelations about the way the Israeli-Palestinian negotiations were handled from the Palestinian Papers as well as the lack of any breakthrough in the peace process, the Palestinian Authority should dissolve to return administration of the occupied Palestinian territories back to the Israelis. He believes that this move would force Israel to fulfill its duties under the Fourth Geneva Convention (1949) and as such expose its apartheid to the world. He argues that this would not be considered as a surrender of the Palestinian cause and instead will move the cause forward, which I would beg to differ. I disagree for two reasons. Firstly, just because the author says that it would not be seen as a form of surrender, does not mean that most Palestinians also subscribe to that worldview. Secondly, by removing the Palestinian people right to self-govern, the entire country could disintegrate into chaos making life even worse for the people. The dissolution of any Palestinian representation may invite and further the cause of extremists looking for a reason to incite more chaos to a troubled area. If anything, this would set the Palestinian cause back by a couple of decades.

The author believes that the dissolution will allow Palestinians to focus on developing and implementing strategies to liberate them from occupation and suggests that a new body could be reconstituted from the Palestine Liberation Organization (PLO). He suggest that a new Palestine National Council (PNC) be created that would hold elections across the Palestinian Diaspora and have its members directly elected by the Palestinian people no matter where they are. The PNC would then be considered as the Palestinian people’s “parliament-in-exile”. This sounds a little confusing because isn’t that what the Palestinian National Authority (PNA) already is? If the goal is to try to track Palestinians all over the world and to provide them with the chance of electing their representatives, wouldn’t it make more sense to do it in the PNA instead of dissolving the PA and creating a new one? This is like throwing the baby out with the bathwater.

The author also suggests that alternatively, the Palestinian people should focus on decentralized resistance through boycott, divestment and sanctions (BDS) internationally, citing how these movements are usually leaderless like the revolutions spreading across the Middle East and North Africa. I would like to argue that this serves no purpose at all. In the uprisings of Tunisia, Egypt, Libya and others, the purpose was to replace and topple the existing regime. By comparing BDS with the Arab revolution would serve no purpose as the BDS movement does not seek to create or replace a political entity. Instead it would create an opportunity for Israel to continue its occupation citing the lack of a political and civil structure in the territories needing its forces present to maintain security.

If the Palestinian people are serious about ending the current stalemate, they need to continue strengthening its existing political institutions and work within the current framework to reach a solution with Israel.

While I acknowledge the author’s statement that the BDS movement has been successful and integral in ending the apartheid in South Africa, it is not solely the reason for it. The African National Congress (ANC) existed as a political entity at that time and through the very same framework that kept black Africans and white Africans apart, continued to negotiate with the government and eventually rose to power after the country’s first democratic elections in the mid-90s.

The author’s arguments are based on the assumption that Israel is just an external player and a free Palestine can be achieved if its people take things into their own hands. Unfortunately it doesn’t work like that. A free Palestinian needs Israel economically post-occupation, just like how Israel needs a governing and stable Palestine to secure its borders and the safety of its people.