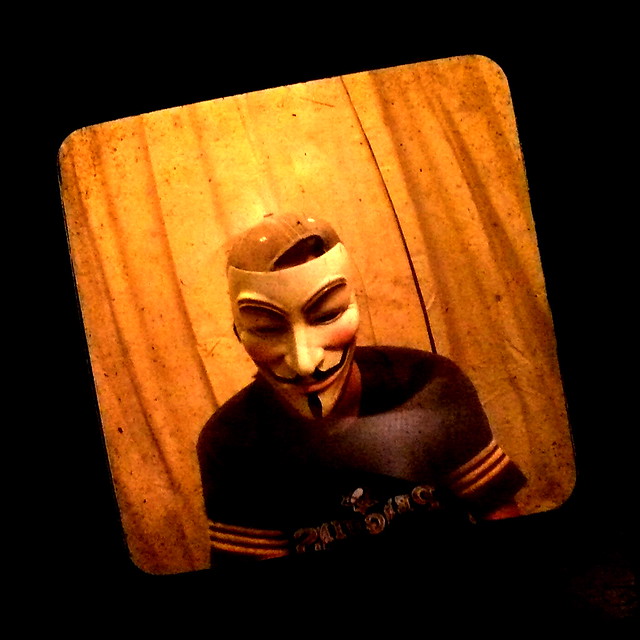 I’ve just read this BBC article about the emergence of the V for Vendetta masks as a symbol of anarchism and the anti-establishment movement and I read this quote by Rich Johnston, a commentator on comics, where he is quoted:

The idea of the V mask being appropriated as a political symbol is inherently ridiculous, he suggests. "It's like assuming you can bring down a government using a light sabre or a He-Man sword."

I can’t help but feel that he has unfortunately missed the point and the symbolism of the mask. While the BBC article made a very valiant attempt at deconstructing it, I can’t help but disagree that this is just another one of those examples of pop-culture meeting popular people movements (see: Che t-shirts).

I would think that in Alan Moore’s V’s mind, wearing the mask brings home the point that it is not about the individual anymore. When you don the mask in a group, you are no longer you. You are no longer an individual and there’s nothing to distinguish you (physically) from the others, and as such people can only focus on the one thing which is graspable. Your idea.

And I think this is why the V masks are so popular. Too often in today’s media and age, we are just too fixated with the person and not the idea behind his/her actions. The protesters recognize it and uses it to represent their frustration in wanting to bring attention back to the issues and not the personality.

I’ll leave you with a quote which still remains etched in my mind today and I hope that it will have an impact to you as it has to me.